STAND UP!!! LGBT and immigrant friends and allies, UNITE! 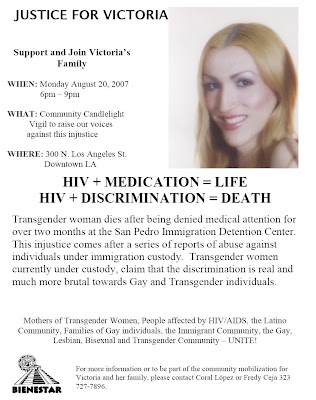 The vigil for Victoria was just postponed. It will take place ONE WEEK from today. Today's demonstration will focus on the recent deportation of Elvira Arellano which occurred yesterday at La Placita Church.

Elvira had been on a speaking tour of churches to raise awareness for the New Sanctuary Movement. She was leaving the church with her young son when ICE agents surrounded her and her car. She asked for a moment with her son, who remains in the US, and then she went with the federal agents to the Federal Building where she was subsequently deported the same night to Tijuana.

Tonight's vigil will be another in the long struggle for human rights and dignity against oppressive immigration laws. Elvira Arellano, as well asVictoria, highlight a system that has no regard for human life, nor demonstrates dignity and respect each human being. Radio pundits, federal spokespersons and wedge driving politicians will proclaim that laws were broken and the law must be upheld.

People who cherish freedom, civil and human rights and still believe in a system of justice understand that laws should be based on reality and compassion. Laws are man-made and can be re-made to reflect justice, humanity and fairness. We say laws that allow mothers to be separated from their children and laws that allow the denial of life-giving medication are unjust, inhumane and should be changed. We demand that change.
Posted by Sky at 10:42 AM