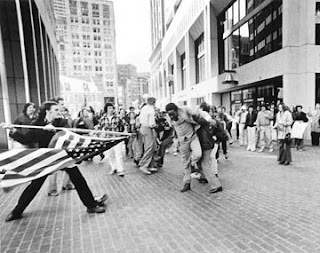 The second Youth Media Blog-a-thon kicked off today, and so far the discussions is as deep and varied as the people involved:

Oh Dang! posted an interview with rapper and former gang member Bambu on how he addresses violence:
http://www.ohdangmag.com/archive/features/bambu.html
"Violence is violence. I support the people's right to armed struggle, self defense. I understand the root of violence in our culture and I in no way condone the taking of lives for nothing more than petty beef. This is where my personal beliefs start to fuck with me, because if someone tried to hurt anyone close to me, instinctively, I don't want them breathing anymore. By nature, it may be wrong, but that's my honest feeling." -- Bambu

Youth Outlook brought up an important point: Why it easier to find information on war abroad than it is at home?
http://www.youthoutlook.org/news/view_article.html?article_id=18bd8016b47e314300b9687141216dc7

"I think it is pretty distressing when I can search and find almost instantly – the total number of soldiers who in the Middle East during the last five years but can’t get a clear number of the individuals murdered in the Bay Area – or even the United States as a whole."

Boston Progress Radio talks about how hard it is to escape violence in Boston:
http://www.bprlive.org/
"We are all products of our times. If you’re 11 when bombs started falling again in Afghanistan and Iraq, now that you’re 16, how do you view the world? More than 80,000 Iraqi civilians have been killed by the US, you know, the liberators. The heroes. The good guys. So how are we supposed to believe that violence isn’t the answer? It sure seems like it’s the answer…doesn’t it?"

Vanessa Huang gives her reaction to the fifth anniversary of the invasion of Iraq:
http://graniterainbow.wordpress.com/
"My political positioning and strategic choices in challenging sites of violence have evolved over the last five to seven years from involvement from a congressional district office to a more local focus, partnering with folks outside of the state to challenge imprisonment... "

And then here I go airing my dirty laundry all over the internets again:
http://www.wiretapmag.org/blogs/warandpeace/43466
"it seemed like the people most impacted by violence are so wrapped up in fear, hopelessness and isolation that silence becomes their only safeguard against a litany of meaningless words and empty rhetoric."

Read, comment and join the discussion! More is coming throughout the day...including some from The Playground homies.
Posted by Jamilah at 1:13 PM