Confessions of a sports movie addict 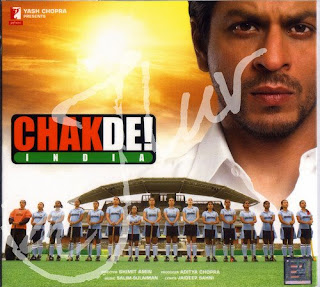 So it's out in the open. Yes, I have probably seen every corny sports movie out there (hollywood, bollywood, indie movies, you name it). You know the ones where the team sucks and looses horribly to their arch enemy in the first match. Then a series of events follow at the end of which they meet again in the final of some tournament, and the underdog teams wins. Overtime and/or a shootout of some kind is almost always involved.

But this post is about more than that. Enter Chak De India! Mind you the story line is pretty much exactly the same. However there is a twist. This movie is about ... ready? SOUTH ASIAN WOMEN PLAYING SPORTS!! Yes, a mainstream Bollywood movie with iconic actors that shows brown, Indian woman playing sports. There have been Bollywood sports movies. There have been sports movies about expat South Asian women. But never this that I know off (please let me know if I am totally wrong on that). Don't get me wrong, I could write a thesis about why this movie is still problematic. But then again it is a mainstream movie.

Its been more than four months since I first saw the movie, I thought the excitement would wear off by now. Sad, but a female South Asian self-identified sports lover like myself gets few opportunities to get excited about something like this. The last time was when Bend it Like Beckham came out. Since I now have a choice between movies I will declare that I probably still prefer Bend It to Chak De since it is a better movie, in my opinion. Despite the fact that they did not keep the original Queer storyline ...
Posted by goc at 11:13 PM

YEAH! It's so rare to find ANY movies that touch on women in sports, unless we're cheerleaders or some srtuggling sports star's baby momma. Glad to see this is out -- flaws and all :)

A reliable web development Dubai service holds paramount importance to create the strong online presence.
Aside from being resourceful, Filipinos are also known to
be very creative. Naima Turner: In the future,
will we see an expansion of your collection to include accessories, etc.

Owning your own online money making websites is a
desire for many folks since it means that you'll be able to make money from home or anywhere in the world from which you are able to use the internet. If they were making good money, like most of them claim, an uninterested client or two wouldn't "hurt" them as much as they are
showing. The moment your name gets to be well known and your special talents are
regarded, you can generate far more exciting and complicated themes for which you can cost according to the time and
work you had to place in.