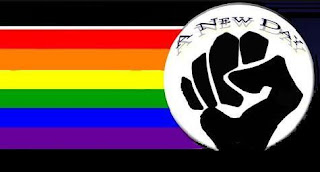 My first Pride parade sucked. I was 15-years-old, scared out of my mind, and alone. As far as I knew at the time, my fam wasn't 'bout it 'bout it when it came to the gays and neither were my conservative Christian friends. So while I had mad crushes on girls from my basketball team and wrote silly little love poems for my future wifey, I was pretty much on my own when it came to processing what everything meant. I don't remember much about that first parade, but I do remember crawling through the masses of people near Civic Center and buying a few rainbow colored necklaces -- including a bright ass boa -- and somehow winding up at a bus stop on 18th and Castro. I sat there, alone, overwhelmed by it all. More than the fear, I felt a huge sense of pride that there were people like me and that there was hope beyond my adolescent daydreams. I made a promise to myself, right there, that I'd come back one day with a posse full of down ass queer kids and, of course, a girlfriend.

Seven years later, I can't say much has changed. I'm still scared, single and inching my way out of a self imposed closet. I've realized that there's a lot more to the game than who you're boo'ed up with in bed at night, and all that wordy institutional shit that I usually knock people for saying -- QPOC's, heteronormativity, racism, sexism -- has a lot to do with my averted glances and tendency to fuck up relationships. 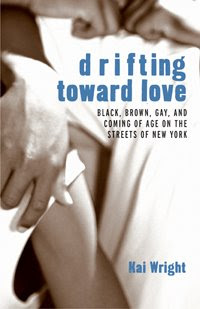 So when a co-worker left an advanced copy of Kai Wright's Drifting Toward Love: Black, Brown, Gay and Coming of Age on the Streets of New York on my desk in early January, I barely gave it a second glance. I was so over all things gay and New York City. I took the book home and it sat in a pile of miscellaneous junk near my bed for months. Then on a random day about two weeks ago, when I was feeling particularly shitty after a conversation in which the other person used some ridiculously long, mutli-syllable word for some oppression that I was almost certain they'd never experienced, I decided I wanted to read something gay. I didn't make the decision out of spite so much as out of a genuine desire to "interrogate" why I was so uncomfortable with the standard activist lingo for sexual identity. At some gut level, I was sure that words like "heteronormativity" and "gender non conformity" bothered me more because they represented a part of my identity that I rarely got in touch with, let alone shared with others.

Then I realized I had no gay books. Aside from The Color Purple and some standard Audre Lorde, I had no books on queer folks of color. And while I wanted to be introspective, I didn't feel like being particularly deep in the "i'm-questioning-my-bodily-existence" lesbian type way.

Then I remembered Wright's book. I dug it out from its hiding place and became engulfed for two days. I don't like using the word "brilliant" because I feel like it's an overrated word to describe overrated things. But this book did change my life.

It follows the lives of a group of very different gay boys of color in New York City. It also manages to steer away from using textbook analyses to describe the lived realities of regular ass folks. It steers away from pointing toward answers, instead focusing on telling their compelling tales of heartbreak and survival. Through these amazing stories, Wright breaks down the notion of some monolithic queer kid of color experience and tackles it from all angles -- the headstrong guy from Brooklyn who proudly wears his queerness from birth; the shy 25-year-old struggling to get past familial expectations to live his own life; the foster kid who took New York City by storm; and so many others.

What I loved most about this book is that it looked at gay identity from more than just a gay lens. It took into account experiences of immigration, gentrification, displacement, emotional neglect, and how folks form their own racial identities. It examined how the culture wars of the '80's informed our popular view of everything from AIDS to sexual predators. From a narrative point of view, Wright examined a piece of one story -- the fight over Manhattan piers, for instance -- as the starting point for a historical analysis of the Village going all the way back to European colonization and the genocide of indigenous inhabitants, before launching into the traditional peek at Stonewall and how it liberated gay white men.

Two of the most poignant moments for me came in discussions about the lack of gay role models for queer youth. In one instance, a character discusses how important it is to be out, to fight for the safety of the entire community. At the very least, it shatters what we think we know about who gay folks are and what they look like. In another discussion, one of the young folks comes out to his brother, fearing rejection. His brother tells him that they had a gay uncle, who died of AIDS when they were young. From there, the book examines the death of a generation of potential leaders and mentors at the hands of the AIDS epidemic.

More than anything, I respect this book and its intent because it's more than another dooms day tale of how shitty life is for gay folks of color. Wright does a great job of letting the characters' personalities shine through, and they're funny, charismatic, shy and courageous. It opens the door for a much larger, inclusive discussion of sexual identity within the context of how Black you think you are and meeting Mama's expectations.

So as another gay pride month approaches, I may not be any gayer than I was seven years ago, but I'm starting to learn to take consciousness one small baby step at a time.

For more on Kai Wright, check out his website at www.kaiwright.com and check out this month's edition of Colorlines, the Sex Issue, which he Guest Edited.
Posted by Jamilah at 9:15 AM

Love the post. I clicked over to your page from a link at thecheddarbox. I'm a hetero, Af-Am/White, middle-class male who realizes that i do not know enough about the struggles/issues/topics, etc etc of queer folks. I wanna read this book and try to up my understanding. I feel you on the whole aversion to people using all the college words when talking about shit that is important to me, and I guess I am also getting back to a point where I'm opening myself up to ideas that challenge me to be a better person.

You don't know me from a ham sandwich, but I just wanted to let you know that I appreciated your post. I got a blog that I update whenever I can at slavename.wordpress.com.

hey, thanks! and i checked out your blog a while back from thecheddarbox. i'll def. check you on the regular :)