how not to make black friends

When an overwhelming number of Black folks in the sometimes-liberal state of California voted in favor of a gay marriage ban, and you began to riot against said Black folks (and their allies), activists of color had one simple -- albeit timely -- suggestion: invest the time, energy and resources to help queer folks of color organize their own communities. While I know that adding a racial justice lens to your framework might seem soo 1992, for many queer folks of color, it's a matter of life and death. Not to mention that adding a racial justice lens might also help ease racial tensions and allow both sides to work in their own self-interest.

But this isn't exactly what activists of color had in mind: 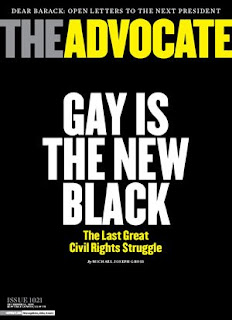 In fact, it's, like, the opposite. Just in case you weren't paying attention, co-opting the language and spirit of the civil rights movement and using troublesome terms like "new black" and "last great civil rights struggle" are downright inflammatory, not to mention blatant signs of cultural appropriation. Kinda like Madonna in Vogue.

Instead of reaching back in history for a historical precedent, you might want to articulate the ways in which the current struggle for gay marriage is directly related to the livelihoods of communities of color. Surely, you musn't think that communities of color, and Black ones in particular, don't already know and love their funny-acting queer cousins, daughters, sons and choir directors. Also think about the fact that historically, legal marriage in the Black community hasn't exactly been fostered by the interests of white privilege.

I sincerely hope that we can use this as a 'learning moment' that opens up constructive dialogue. If not, you can kiss "Gay Marriage in 2010" goodbye, too.

Sincerely,
Jamilah
Posted by Jamilah at 8:42 AM

im so glad you wrote about this, i was about to. this angered me so much