MIA speaks out on political turmoil in Sri Lanka 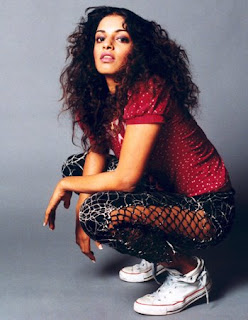 “The situation is systematic genocide, ethnic cleansing,” she says by phone from L.A. “I want my fans to know I’m not tryin’ to be like Bono. Someone Irish talking about what’s going on in Africa. I actually come from there and the fact is that this is happening now. The war has been going on for a long time, but it stepped into the genocide bracket recently with the new President. I lived in Sri Lanka when the campaign for ethnic cleansing started and if I could stop it and see the end of it in my lifetime that would be amazing. I can’t justify my success otherwise. I can’t justify getting nominated for an Oscar or a Grammy, that to me wouldn’t mean anything if I don’t actually get to speak about this. It’s not like I’m trying to sell records, I’m trying to stop the death of 350,000 people this month.”

The situation in Sri Lanka has become increasingly precarious, as thousands have been murdered, including many children.

MIA named her first album, Arular after her father, who founded the Eelam Revolutionary Organisation of Students (EROS). The group, called "militant" by the Sri Lankan government and its western allies, has fought for nearly four decades to establish an independent Tamil state. Their efforts have often come in the face of violent and repressive measures by state government officials.

As far as MIA goes, her family was eventually forced to flee as refugees from Sri Lanka to India and, finally, to London.

She was recently nominated for a Grammy for her track "Paper Planes" and an Oscar for the Slumdog Millionaire soundtrack.


Via DJ Phatrick
Posted by Jamilah at 7:54 AM

I actually love her:)

It is simply matchless theme :)