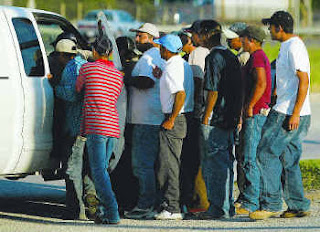 As immigration reform sits idly on the desks of American politicians, the pressure has only increased for many undocumented workers who are finding it even harder to get work in construction or agriculture. Many still gather early in the morning with hopes of landing work for the day, but instead of being offered traditional jobs, they're being offered cash in exchange for sex.

La Opinion initially broke the story, which was translated into english over at New American Media:

Their faces reflect how uncomfortable it is for them to talk about. On street corners where day laborers congregate, it’s no longer as easy to find work – but there are plenty of offers of sex for money. There is also a high incidence of workers being drugged and raped, something suffered by many, and hidden by all out of shame.

"The situation is happening more frequently. It happens more on the unorganized corners than in day labor centers, but the problem itself is widespread. It’s like a well-known secret that everyone knows and has experienced, but no one talks about,” explained Pablo Alvarado, national coordinator of the National Day Laborer Organizing Network.

As if the brutal seperation of families, downright racist exploitation and NAFTA weren't reason enough to hasten some sort of meaningful, comprehensive immigration reform in congress, now surfaces the dirty underbelly of just how> some of the nation's most vulnerable workers are being exploited.

Of the group that continued negotiating, only the youngest got in the truck.

“What’s your motive for hiring day laborers?” La Opinión asked the two older white men as the worker settled into the backseat of the truck.

“Who are you? What’s this for?” the driver asked defensively.

Inside the vehicle, the worker looked scared.

“We are doing an investigation about people who hire workers for sex acts. What do you think about that?” La Opinión asked.

“I don’t know anything,” the driver answered and accelerated, clearing a path through a group of curious onlookers who were approaching the car.