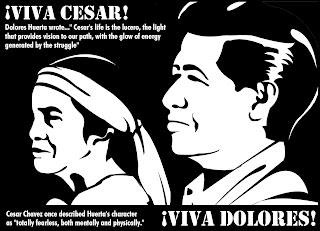 The people united will never be defeated!
Monday, March 31 is observed as Cesar Chavez Day, at least in the states of California, Texas, Arizona and Colorado. It is the first and only holiday in the United States to honor the legacy of a Mexican American. And unfortunately, it is a holiday that many pubic school districts in these four states chose not to observe, much less teach their students about—especially sad in the Los Angeles School Unified School District, which has a considerable Latino student population.

I first learned about Cesar Chavez in my first year in high school. I would love to say that I learned about his civil rights activism, approaches to nonviolent resistance, and campaign for labor rights through some cool, hip teacher fighting the monotony of high school education books. But, that was not the case. I learned about the United Farm Workers, Dolores Huerta, the Delano grape fruit boycott, and Cesar Chavez's approaches to nonviolent resistance through an array of library books I devoured over the course of the summer. By the time I had returned to school, I had written what I thought was one bad ass research paper on his legacy, which earned me a top grade in the class. Not bad for my growing nerd status.

By the way, Cesar Chavez didn't do it alone. Let's not forget Dolores Huerta's work as co-founder of the United Farm Workers and her continued activism for civil rights.
Posted by Gee at 12:10 PM

Email ThisBlogThis!Share to TwitterShare to FacebookShare to Pinterest
Labels: activism

nor can we forget philip vera cruz and other non-latino farm workers.