Shepard Fairey's Past (and Future)?

Shepard Fairey is many things: a world-renowned street artist, successful clothing entrepreneur and acclaimed graphic designer. But is he also an obsessive plagarist?

Many of his fellow street artists think so.

He came to fame in the early '90's and has since become one of the most recognizable -- and profitable -- street artists in the world. He's mostly known for his OBEY GIANT street art and a clothing line by the same time. Most recently, he's gained acclaim for his iconic Obama posters: 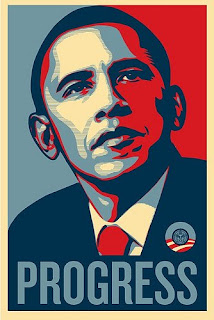 Fairey eventually struck a deal with the Obama campaign and the posters became official Obama '08 artwork, selling millions of copies and becoming synonymous with Obama's political ascension and the political hopes of a generation.

Unfortunetly, Fairey has a very troubled past in the world of progressive printmaking. Oakland-based printmaker and political activist Favianna Rodgruez recently pointed out that, contrary to his aim to forward social movements in the US and abroad, Fairey's most noticeable artistic trait is plagarism.

In fact, in an article by artist Mark Vallen, co-reasearched by Rogriguez and two other artists, published to coincide with Fairey's Los Angeles solo exhibition in December 2007, numerous examples of Fairey's alleged plagarism come to surface. You be the judge:

[ Left: Political power comes from the barrel of a gun - Artist unknown. 1968. Chinese poster from the Great Proletarian Cultural Revolution period. The title of this poster quotes the famous pronouncement made by Mao Tse-Tung. Right: Fairey's plagiarized version titled, Guns and Roses. The Chinese poster's central motif of hands bearing machine guns was plainly digitally scanned without any alteration. Fairey, or his assistants, then applied a modified sun-burst background, placed clip-art roses in the gun barrels, and released the imitation in 2006 as a supposed original work.] 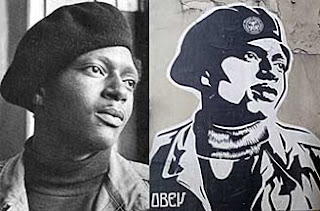 [ Left: Black Panther - Pirkle Jones. Photograph. 1968. Portrait of an anonymous Panther at a political rally in Oakland, California. The Panther photos of Ruth-Marion Baruch and Pirkle Jones are internationally famous and have long been available in book form. Right: Fairey’s street poster, which neither credits Pirkle Jones nor makes any mention of the Black Panther Party.]

[ Left: Libertad para Angela Davis (Freedom for Angela Davis) - Félix Beltrán, Cuba, 1971. Original silk-screen print created by Beltrán in solidarity with Angela Davis when she was a political prisoner in the US. Right: Fairey’s plundered version as a street poster, which neither credits Beltrán nor identifies Angela Davis.]